When I travel, I never skip a chance to hit UNESCO World Heritage Sites.  I have never been disappointed by any of the World Heritage sites I have visited around the world.  Be it the ruins at Sabratha in Libya, the Taj Mahal in India, Ngorongoro Crater in Tanzania, or others,  they all have one common denominator:  always spectacular and all leave a mark on you as a place that is truly unique and special in the world.  I guess that´s why the UNESCO grants them World Heritage Status.  Here´s a link to the entire list of 936 sites in in the world if you are interested in knowing what they are.

FYI, in case you don´t know, UNESCO stands for United Nations Educational Scientific and Cultural Organization and they grant World Heritage Status to sites that “form part of the cultural and natural heritage which they consider as having outstanding universal value”.

The UNESCO World Heritage Site status of the Cave of Altamira and Paleolithic Cave Art of Northern Spain is no different.  In Cantabria where I live, that includes the cave of Altamira and 9 others (El Castillo, Las Monedas, Las Chimeneas, La Pasiega, La Garma, Covalanas, El Pendo, Hornos de la Peña and Chufín).  Each one of these is unique and each one has something different to offer.  Many times the views or the trails to get to the cave can be pretty amazing themselves.  But when you step into the cave, everything changes… 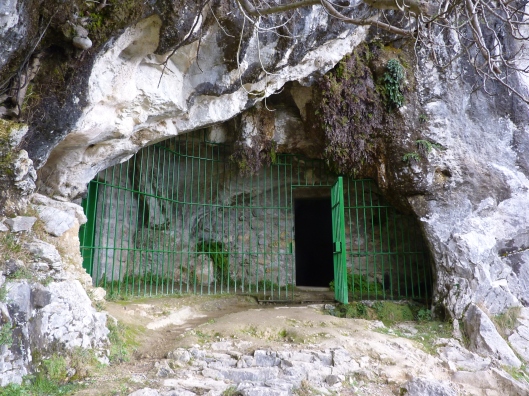 There is something special about standing next to a art that was created in some cases over 30,000 years ago. Think about it…. thirty-thousand-years….   Knowing you stand in the same spot where a paleolithic man or woman did thousands of years ago to paint is a pretty amazing feeling to say the least.  The grasp of volume and perspective of paleolithic artists is pretty amazing.  Your mind can´t help to wonder thinking why they painted what they did.  Sometimes it´s obvious as with the animals such as bison, horses, reindeer, aurochs, mammoth or many others.  Other times it´s less obvious with strange symbols or anthropomorphic figures that combine human-like traits with animal traits.

I take visitors to see the caves often and I never get bored of going back in.  Each time is a little different and you always notice something new.  Its nice stepping that far back into time again and again. A fascinating slice of history available in Cantabria, always worth another look.