Several weeks ago was the Ortigueira International Festival of the Celtic World, a celebration held in the small coastal town of Ortiguiera, Galicia, Northern Spain. It is a celebration of Celtic world and its music. Bands and musical acts come from all over the Celtic World and beyond to play at this festival.

The Celtic World here refers to the western half of the British Isles, the tip of western France and Northern Spain, all areas that were inhabited by Celtic tribes in the past. There is an official political organization called the Celtic League that recognizes only those territories that still speak a Celtic language namely: Ireland (Éire), Scotland (Alba), Wales (Cymru), Brittany (Breizh), Cornwall (Kernow) and the Isle of Man (Mannin). Although not officially recognized as the Celtic languages have been lost, Celtic pride runs deep in Northern Spain, particularly in Galicia, Asturias and Cantabria.

Days at the festival are filled with parading bands and impromptu jam sessions outside (or inside) bars. Here´s an example: 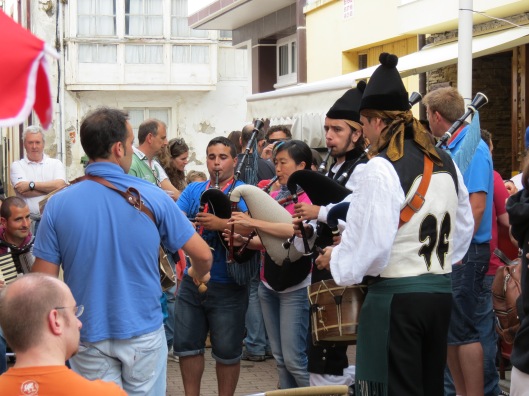 There are nightly concerts that start at 10PM and last nearly till dawn with bands and groups that play Celtic music from around the world, from as far away as Japan this year. Here is the 2012 program. 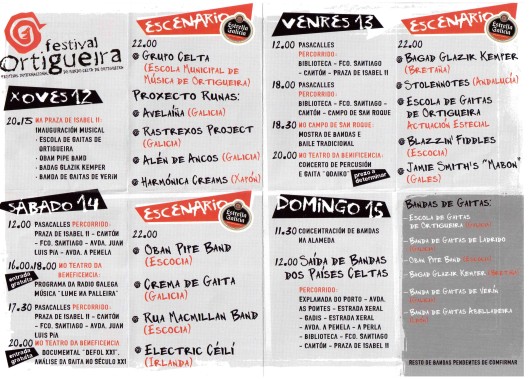 Thursday night concerts are devoted to up and coming bands and part of a project called Proxecto Runas. This year brought 3 bands from Galicia and a band from Japan named Harmonica Creams. All were great but the Japanese headliners took the cake or should I say sushi? A group of four, including guitar, fiddle (violin), bodhran and harmonica playing singer. They were all over the stage and really got the crowd going and so into it. The bodhran player couldn´t stop saying “origato” (thank you) to the crowd. Simply wonderful.

Friday and Saturday nights brought a mix of bagpipe groups and bands to the stage. The local bagpipe band from Ortigueira always does a great show on stage and this year we got treated to Bagad Glazik Kemper (Brittany) on Friday and the Oban Pipe Band (Scotland) on Saturday. All were great, especially enjoyed the unique sound made by the Breton bombards (which I´d describe as a sort of thick clarinet) and when a pair of Oban pipers did a little dance around stage and flashed the entire crowd (no they don´t wear anything under their kilts).

Especially enjoyed Jamie Smith´s “Mabon” from Wales on Friday and the Rua Macmillan Band from Scotland on Saturday. Between bands there are always groups of folks playing their instruments around the concert area and in the bars. The music never stops. The festival is held outdoors near the port area and it is free. We have a friend that happens to live there so we have a place to stay but most people camp outside of town.

Sunday is my usually favorite day with all the bagpipe bands parading around the entire town. Here are some shots of all the bands. 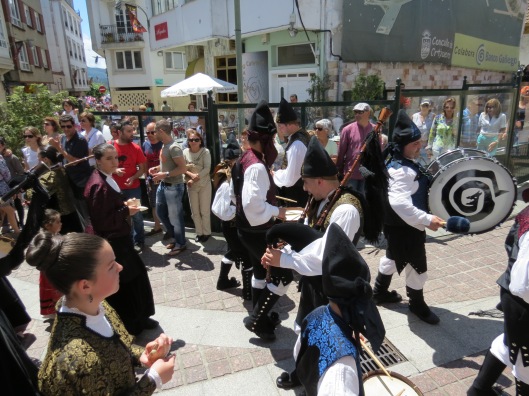 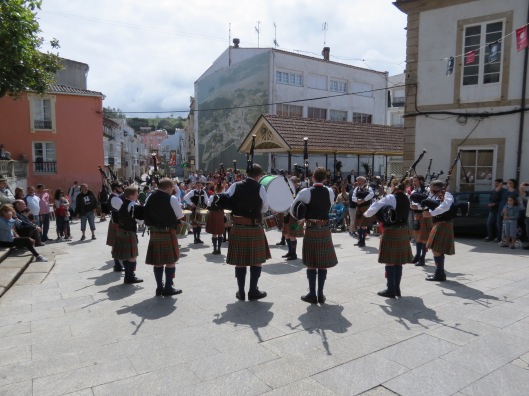 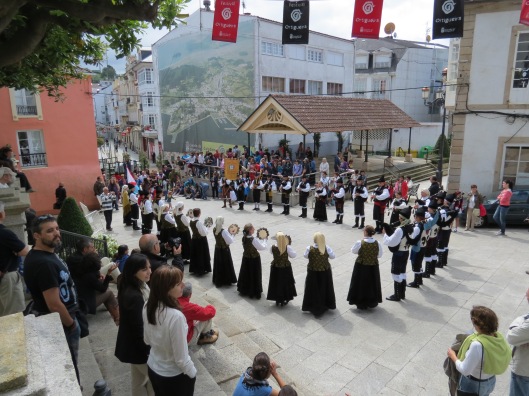 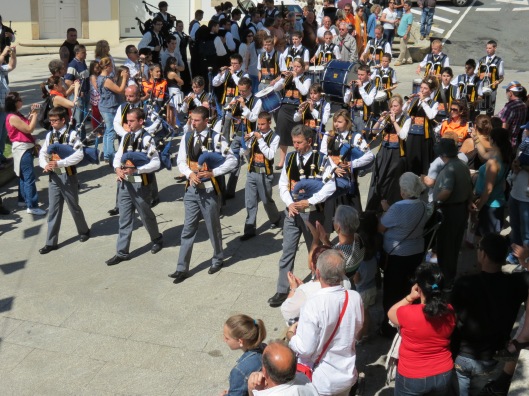 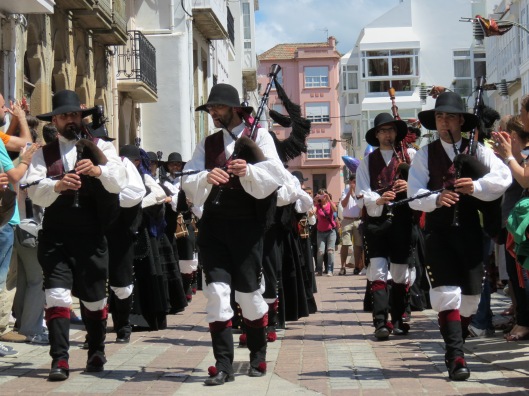 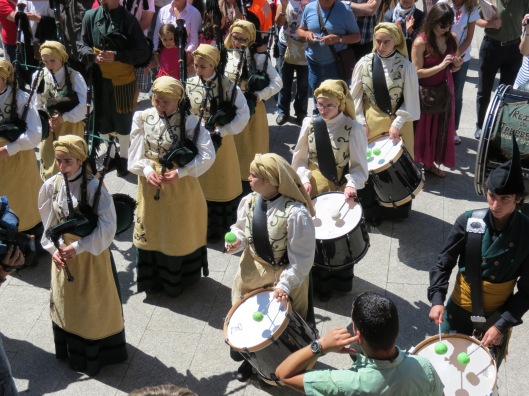 While most people don´t think of this kind of music coming from Northern Spain, obviously there is a lot of it here. It makes for a unique culture and one that not what most people envision Spain for.

After the festival was officially over we headed to the beach and had a great Galician seafood meal and enjoyed the great weather. We then stumbled into this scene:

It was an Ortigueira after party in the neighboring town of Espasante. The band was great and as a curiosity I recognizedc the singer but coulddn´t put two and two together till it hit me! He looked just like the percebes (gooseneck barnacle) fisherman in a very cool documentary I had seen. I talked to him afterwards and yes, it was him. Funny. The band finished and the music moved inside with members of many of the bagpipe bands showing up and playing into the wee hours of the night on Sunday. It was incredibly fun….

I´ll leave you with some shots of details of the festival that I like….

The many faces of the Ortigueira Band Conductor

Bagpiper statue on the square where the festival is held 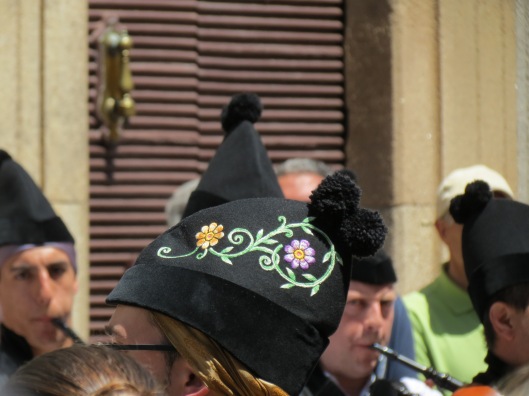 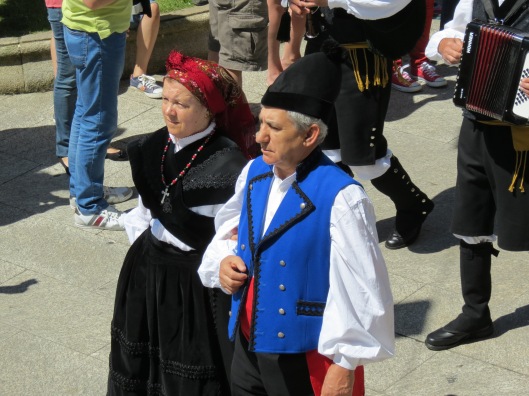 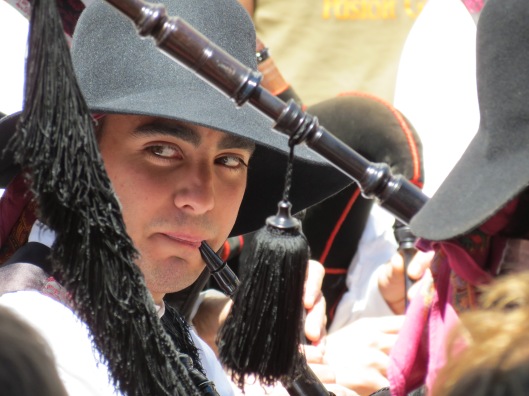 My friend Sergio, blowing and going 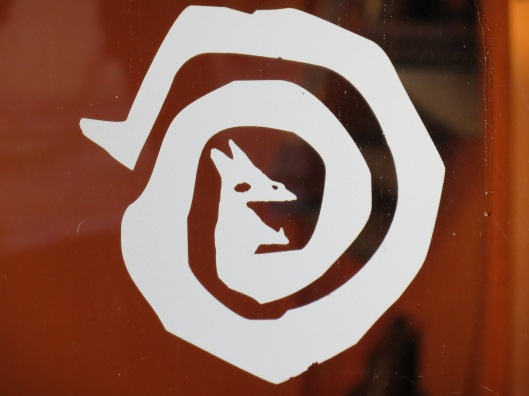